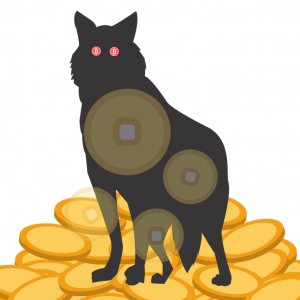 I recently came onboard to GBU as a Master student and Affiliate and love the world of cryptocurrencies.  Not only can I learn about new ways of doing business and how a new financial sensation is sweeping over the whole world, but I can make money trading, using a trading bot, and also earn commissions referring people to buy their Gunbot license from GBU as well.  I encourage anyone else look into becoming an affiliate of GBU if they like earning simple, no pressure referral fees.

I started to use a new telegram-based notifications bot called CryptoSight written by an active member of the gunbot community named Dante.  This was a standalone bot that cost $200 by itself, but the Gunbot people bought it out and now it’s offered as a bundle with new pricing.  You can talk to GBU professors about pricing, I’m sure.

The set up was pretty easy – I went to telegram and started a conversation with @gunthy_bot user (https://t.me/gunthy_bot), which offered me to Activate or Trial the service.  Since I was a valid user, I could Activate (if you buy your CryptoSight from GBU, they will send you your key via your Online Order)

I went through the Activation process, which gave me a text file to put in my API keys. I was already told by my Professors that I should use new API keys and not re-use Gunbot API keys.  Also, I was a little hesitant about sending keys and secrets in a text file to a cloud service, so I looked into it more.  CryptoSight offers the ability to make trades via the telegram bot, plus it actually is reading trades in real-time.  It needs to be able to interact with the Exchange, so that made sense.  But I don’t want the ability, at least at this time, to make trades via the Telegram app, so I made my API keys read-only.

I edited the text file and uploaded it and in a couple of seconds, it reported my exchanges were linked. I’m using all three Exchanges and it let me know that for Bittrex, there was an extra step needed – I needed to upload my trade history. I guess Bittrex doesn’t give all the information CryptoSight needs automatically.

After doing all that, I get the main menu:

When you click Help, you get a couple links to places where you can get additional information 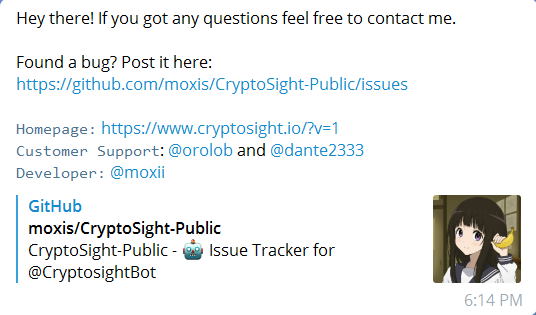 However, the Homepage listed is no longer valid, as it just reports that CryptoSight has merged with Gunthy Bot (aka Gunbot).  Also, the mention of @CryptosightBot must be the old version of the bot.

After playing around with the buttons for a while, I start getting trade notifications. 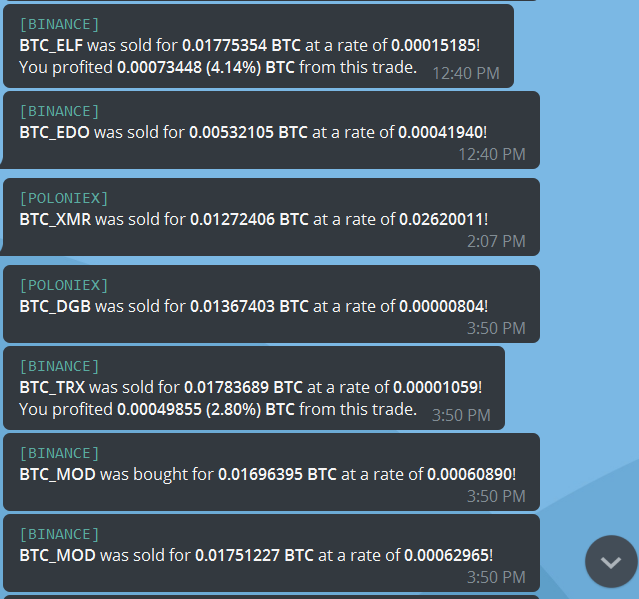 And this is why I’m really starting to like this add-on.  There’s a thrill I get when I get a Telegram notification of a sell or a buy that Gunbot is making.  Usually I just login later at night or look at graphs to see how things are going, but when I get notified that things are happening NOW… and then NOW.. and NOW.  it might get old sometime, but this is heart-racing cool.

I don’t know yet why some of the notifications have profits listed and some don’t.   I would assume that CryptoSight doesn’t have enough information – probably the purchase price.  Maybe as it runs longer, it will get the prices.

Also, I’ve seen some screenshots somewhere where people are able to have it list dollars instead of bitcoin, but maybe that’s a different Telegram Bot.  But I have to say my heart races just a little when I get to see results in this manner!  It’s a nice alternate way to see the fruits of the Gunbot labor instead of just dots on a chart or lists in a spreadsheet.

One other note – Maybe CryptoSight is missing information, because I’m pretty sure I had more than one trade in the time between 12:40 and 3:50 … so I’m guessing the servers are overloaded, the exchange API’s are backed up, or maybe it just delivered the information to me late.

After a while I noticed a few really neat ones:

Wow!  almost 20% profit!  I think maybe I should check to see if that’s correct.

I went over to Bittrex and took a look at the chart:

The chart definitely indicates it’s possible that at least 20% profit was had.  I see two humps in this chart – maybe Gunbot took advantage of both of them.

I checked the trades on Bittrex site:

I’m not sure where CryptoSight’s 19.59% profit’s are coming from yet.  First I check that the “Units total REP” in the BUY and SELL lines are the same, and that I’m not dealing with a multi-order buy or a multi-order sell, which would be more complicated to calculate (and I don’t know if CryptoSight supports).

Not too much later I saw that Gunbot running on Poloniex also caught profit on REP a little later:

Wow – REP is really moving, according to CryptoSight… maybe this is from that second hump I saw in the chart earlier?

But it’s still close enough that I can manually calculate the profits on my own.

In general, the trade notifications are worth it, but the profit reporting seems to be way off.  I wonder what CryptoSight does when Gunbot does microtrades in emotionless, or when there are several buy orders and several sell orders, all that add up to the same general order.

Or — how does Double Up affect the reporting?

Aside from fixing the profit reporting, I think there are some improvements that could be made to make this even better.

Change Font Size and color based on Profit Gained

It would be really neat if there was a way to differentiate the influx of trade notifications that comes in all the time.  It’s hard after a while to notice the small tiny trades from the mediums to the larger ones.  So it’d be nice if losses were red, and the bigger the profit, the more prominent the notification.

Change Strategies or other Config items

This is definitely in the area of “Advanced botting” but it would be neat to be able to change my bot’s strategies remotely.  I would want to control pairs, switch settings to move from aggressive to conservative based on market movements, and other things.  But perhaps that is better handled in an actual GUI interface and not a Telegram app.  Plus, this might give too much power to a 3rd party.

API Activations could be smoother

I know that being “first” is important and getting your product out there in today’s fast moving cryptocurrency world is high priority.  If we all waited for gunbot to be bug free we probably never would have gotten it.  So when I mention things that could be better, it’s not a complaint.

I think that activating API keys could be done interactively with the server.  While I didn’t mind the text file that much, I think editing a file actually adds more complication to the end user, and adds more points where the user could have errors.  I think that the Activate process could be something like “add exchange” and it asks for key, which user pastes in and then it asks for secret, which user pastes in, and then it’s done.  User could copy/paste straight from other window w/exchange and not even use a text file.

It might take a long time for the novelty of getting trade notifications on Telegram to wear off, and in the future, I may want to have a more convenient way of doing an “instant sell” of certain pairs, which the bot supports.

I do hope the profit reporting is figured out, and there are some enhancements I can think of that would make it better. 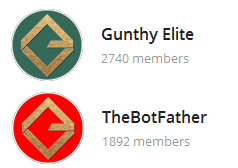 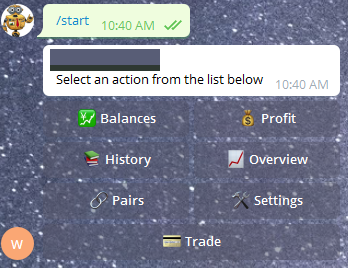 Tip of the day: the New Built-in CryptoSight

Poloniex stops trading for 9 pairs for US customers