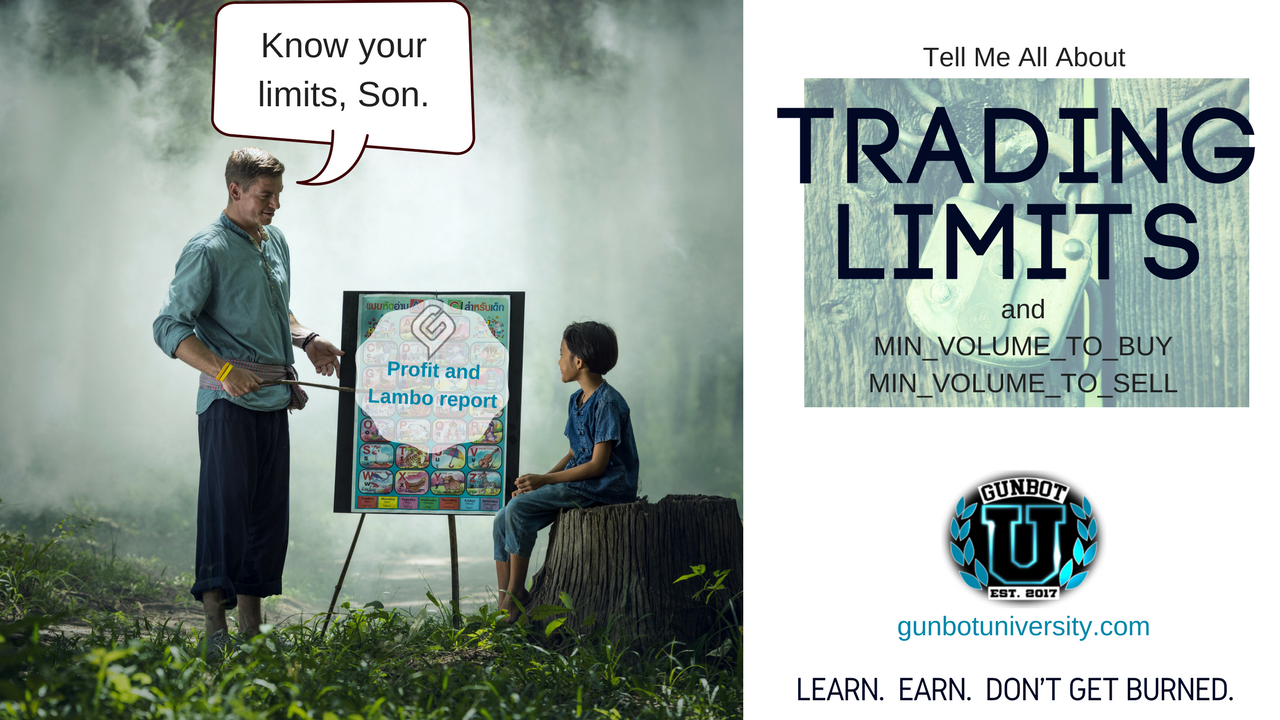 Configuring Gunbot can be an art, and it can be a science.  One of the most basic configuration elements is setting the proper limits to tell Gunbot how much to trade.  This article explains those basics and then some tips on how to avoid mistakes.

Gunbot needs to be told what to do.  It needs to know what pairs you want to run, what strategies to run on those pairs, what Telegram account to notify of massive profits, and so much more.

One of the most fundamental pieces of information Gunbot needs to know is your budget.  Some people trade with very low amounts… skirting with the minimum order size that the Exchange will allow, and others trade with amounts that would make most people’s head spin.

In order to tell Gunbot your budget, you don’t tell it the total amount you have to play with, nor will it assume all the crypto you have in your account is fair game and auto-budget itself. It must be told how big each trade should be, and needs to know how to tell if an amount is too small to care about.  These small amounts, also called “dust”, might prevent Gunbot from trading if it’s not told to ignore them.

Like with any configuration element, your first trip to learn about it should be the official Gunbot wiki.  That’s where the latest intel resides about variables, default settings, strategies and what’s latest in the most recent version.

Let’s see what the wiki has to say about these limits (the wiki, like Gunbot, has evolved over time):

What does this mean?

So, the first thing we learn is that TRADING_LIMIT does not represent your entire budget – it’s the amount Gunbot will trade per pair.  This is important, because every new pair you add to a Gunbot instance can possibly spend at least TRADING_LIMIT amount of your funding currency.

Speaking of funding currency, that’s the second thing we need to know about TRADING_LIMIT  The amount you put as this value needs to be expressed in the same coin as you are using as the funding currency.  In Gunbot, this is the first coin of the pair.  For example, if the pair you run is BTC-OMG , then “BTC” is the Funding Currency (aka “base”) and OMG is the coin you want to buy (aka “quote”).  If your pair is ETH-LTC then Ethereum is your base and LiteCoin is your quote.  In Gunbot’s terms, the base comes first and quote comes second.

Note: As of Gunbot v7, all pairs are denoted in “BASE-QUOTE” format with a dash in the middle, regardless of how the Exchange expresses or denotes the format.  For example, Cryptopia might say “ETH/BTC” with a slash, or Kraken might put it backwards and use “XLTCXXBT” with an extra “X” in front of each asset, but only some, but Gunbot’s notation would be ETH-BTC for the Cryptopia example and BTC-LTC for the Kraken example.

So, put the TRADING_LIMIT in the same terms of the base.  If you run BTC-xxx pairs, then you should put the limit in as a Bitcoin amount.  ETH-xxx pairs need Ethereum values as the limit.

There’s a special case for FIAT pairs (USD, EUR, USDT, TUSD, etc) where not only do you need to put the amounts in FIAT terms (100 for $100, for example instead of 0.001 BTC for a $10k bitcoin value), but in versions 10 and earlier, you also need to not use any decimals.  WHOLE NUMBERS ONLY (this is reported to be “fixed” in later versions, although I have not tested it).

The reason you want to not use decimals in FIAT is that — if there are decimals present, the most likely reason is that you didn’t change it from defaults, and you’re probably using minuscule amounts like 0.002.  You do not want this.

MVTB and MVTS – what are they?

The other two main configuration elements regarding actual money values are MIN_VOLUME_TO_BUY (MVTB) and MIN_VOLUME_TO_SELL (MVTS).  These help Gunbot understand when to buy and when to sell.

“Dust” is a term crypto traders use to describe very small amounts of crypto in an account.   Just like when you use a saw to cut some wood, the action of sawing not only gives the intended result (wood that is cut), but it also produces material as a side effect of performing the sawing — namely, dust.

Dust is important to understand, because you can accumulate dust in many ways in the crypto world.

For one, if you have, say 10.05634 EOS coins in your account, and you are only able to sell 10 of them, you will have 0.05634 EOS left in your account.  This might happen because your sell order couldn’t be matched up to an exact sell order that filled all 10.  Maybe your order was matched up to two buy orders – one for 6 EOS and one for 4 EOS.  Then when it came to try and get rid of the remaining amount, the order would be too small for the exchange to honor.

Another way you might get dust is from small micro-deposits, such as from Binance’s referral program.  Binance gives fee commissions for anyone you refer. It started off at 50% and is currently 20%.  So when someone you refer makes a trade, they have to pay a fee on that trade.  You get 20% of that fee.  The fee is already small – usually 0.1% if no BNB is used and 0.05% if BNB is used.   Therefore you’d be getting 0.02% or 0.01% of their trade, which is almost guaranteed to be a minuscule amount.  This becomes dust in your account.

Binance has since updated their referral program to allow double commissions if you own 500 BNB tokens in your account.  Please see those program specifics for most updated rules and conditions.

This setting allows Gunbot to avoid dust.  Normally, dust clogs up Gunbot and prevents it from trading.  Basically, it won’t initiate a trade if you already own some value of the coin.  However, since “dust” needs to be ignored, Gunbot needs to know what you consider “dust” vs “substantial enough to notice”.

Once you have at least MVTB amount of coins in your account, Gunbot goes into sell mode.  If you have less than MVTB coins, Gunbot is in buy mode.

After reading the wiki entry for MVTS, you might think it’s basically the same as MVTB, since it says “threshold for sell orders”.

How to Set Appropriate Limits

Now that we’ve reviewed a ton of detail on each of the settings, you might just be asking “ENOUGH ALREADY!  WHAT DO I PUT HERE?!?!?!”

Here are some tips on how to set the right amount:

Rule #1: MVTB should be less than or equal to TRADING_LIMIT.

Rule #2: MVTB and MVTS should be greater than or equal to the Exchange’s Minimum Order Size.

If you set this too low, then Gunbot will attempt to make orders, but the Exchange will kick them back.  It’s not like Gunbot is going to auto-increase the values for you – it is your money after all.

Rule #3: It’s ok and common for MVTB and MVTS to be the same

You can set MVTS higher, but be careful that you don’t make Gunbot stop selling while it’s unable to buy.  Most commonly, these two values will be the same amount.

Rule #4: It is highly recommended that TRADING_LIMIT be higher than MVTB  to avoid the “Double Buy Exploit“.  Target would be 3x to 4x, but it’s usually enough to make it 1.5 to 2x.

Many people, and the defaults in previous versions of Gunbot helped with this, use the same amount for `TRADING_LIMIT` and `MVTB`.  However, if you do this, then you are subject to experiencing the “Double Buy Exploit”.  It’s not an actual exploit from a security perspective, and it’s not a bug in any way.  It’s just a consequence of Gunbot doing exactly what you told it to do.

Rule #5: If you’re too Greedy, you’ll suffer in bear markets

Many beginner crypto traders, and especially Gunbotters, look to their right and see someone who has tripled their money with amazing trades.  They look to their left and see another person who’s made 10X gains and brags about the constant profits.

So, naturally, they think that’s what crypto is, so they set Gunbot running and give all their BTC to Gunbot.  It might work for a little while, but eventually the bear cycle comes around and BAGS happen.  And because they were greedy and gave all their BTC to Gunbot, Gunbot did exactly what it was told to do, and pretty soon, all the BTC is gone and all the trader has is a bunch of heavy bags that have lost value.  Instead of blaming themselves and their greedy nature, or their rush to use a tool they didn’t understand, or their tendency to believe those people who claimed 10x gains and didn’t disclose the losses (who brags about the realities?), they blame Gunbot.

We at GBU recommend you use much less than all your BTC when botting.  First, you need room to handle your bags.  Bags happen to everyone and there is no magic formula to eliminate all of them fast, cheap, and cleanly.  You should always keep dry powder, and use much less budget than you think.

When I started off, I used the lowest amount both I and the exchange could stand, and only ran enough pairs that I used 10-20% of my available BTC.  This gave me enough room to learn Gunbot’s settings, to make sure I didn’t make wild mistakes, and when the bear market came, I had plenty of BTC to move to other pairs, use Double Up or move my bags off to another wallet.

With the above guidelines, you should be good to start with what is good for your risk profile, your preferences and your specific situation.

Example: let’s say you run BTC-ETH pair and have 0.002 set for both TRADING_LIMIT and MVTB.  This means when you have less than 0.002 BTC worth of ETH in your account, Gunbot feels like buying.

Then, ETH becomes tasty and Gunbot buys some.  It buys 0.002 worth and it’s now in your account.

Well, Gunbot usually buys on a downtrend, if it’s configured like most people want.  If ETH value continues to drop after Gunbot purchases it, then you will have, say 0.00195 BTC worth of ETH in your account.

If this value stays there for the next cycle, and Gunbot has a low TRADES_TIMEOUT and isn’t using the safety switch, then, per the rules you have configured, 0.00195 BTC worth of ETH is now considered “dust”.  It’s free to buy again!  If the conditions are still ripe for buying, Gunbot will then purchase another TRADING_LIMIT amount of ETH (0.002) and it will be added to the wallet.

Now you have 0.00395 BTC worth and that amount is greater than MVTB, so it won’t buy again.

This shows up as a “double buy” in your trading history, because it will show two purchases of 0.002 close together. You might think Gunbot is double-buying by mistake, but it’s doing what you told it to do.

At time of writing, here are the different Gunbot-supported Exchange minimums: 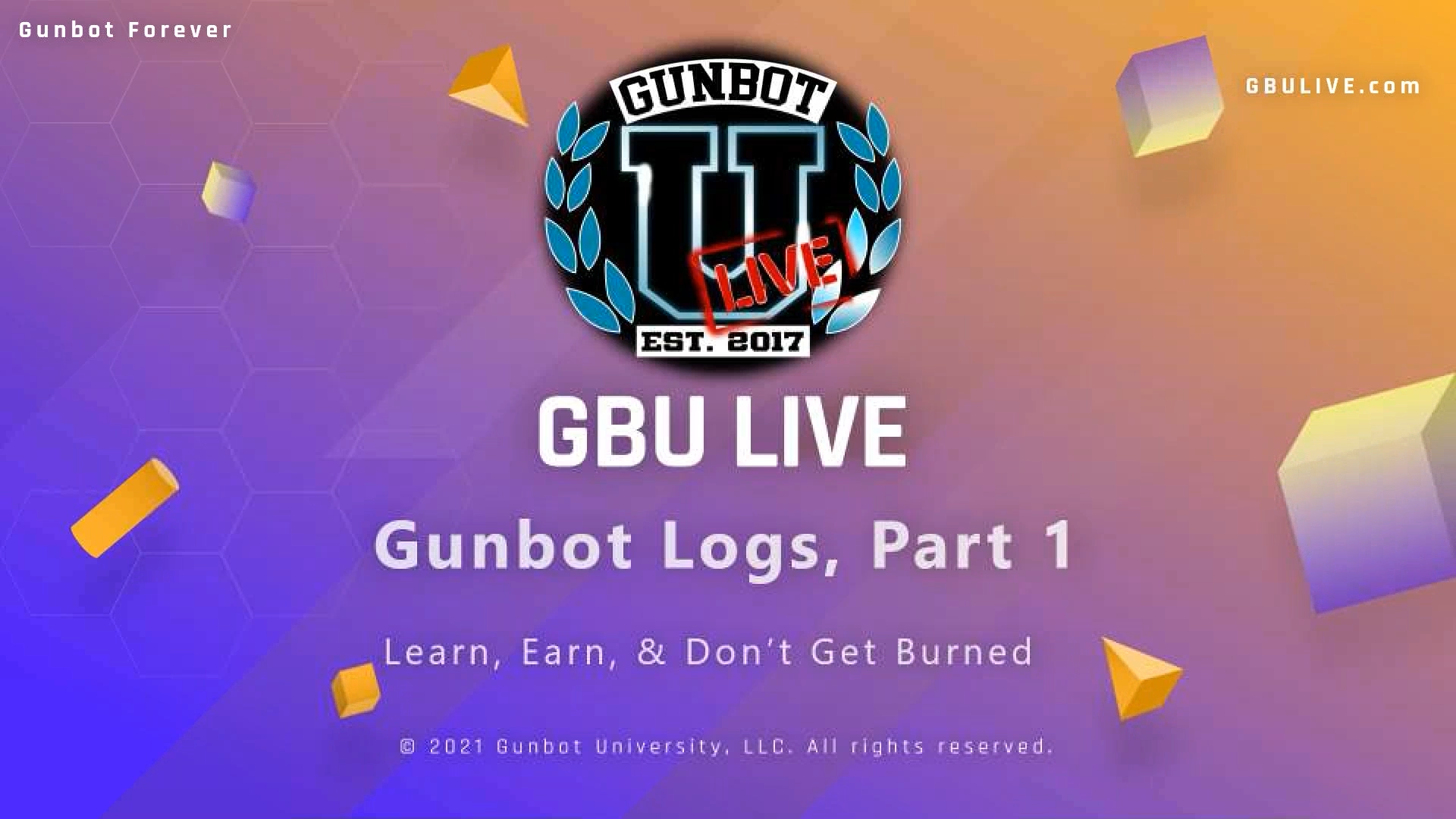 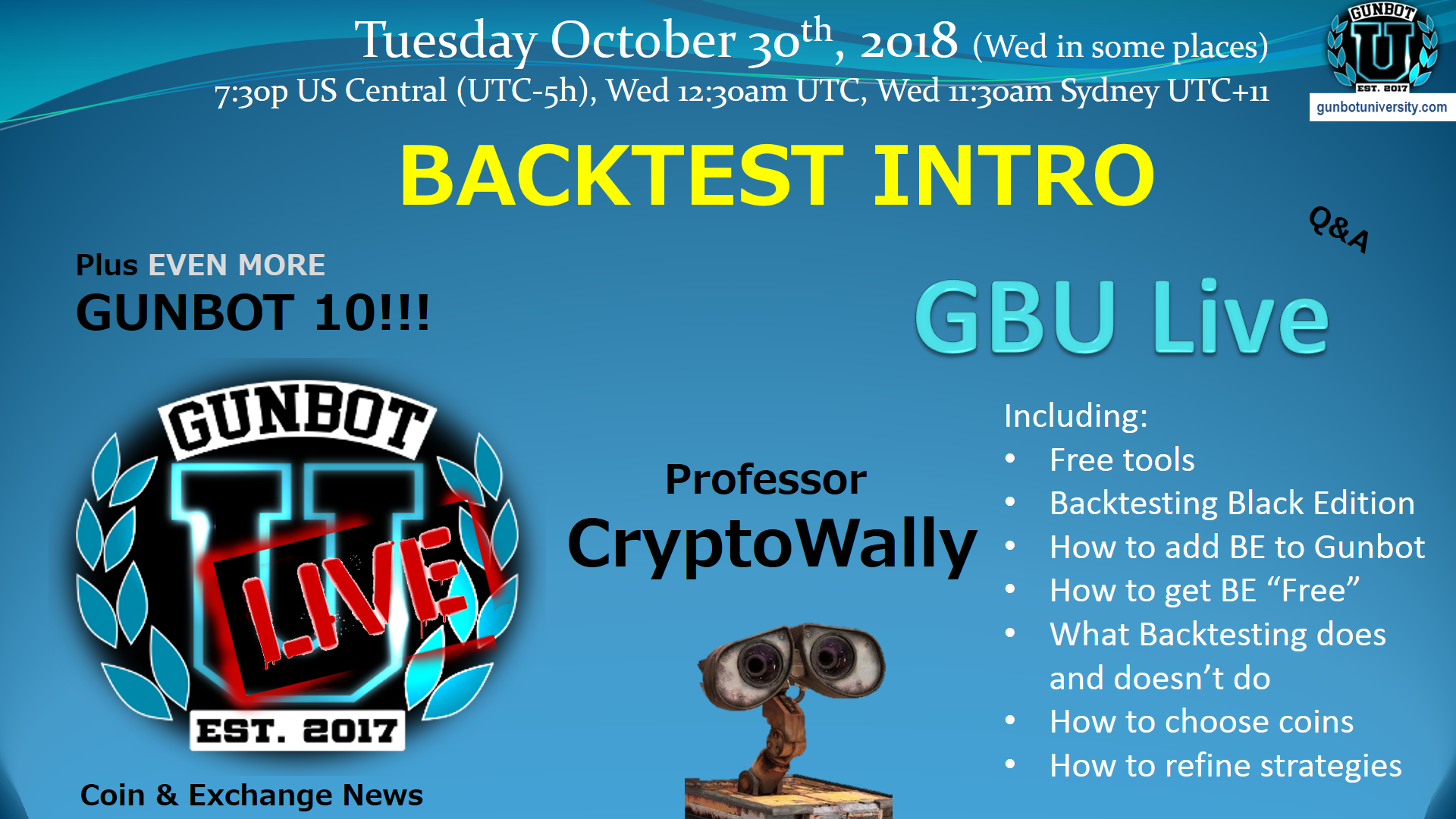 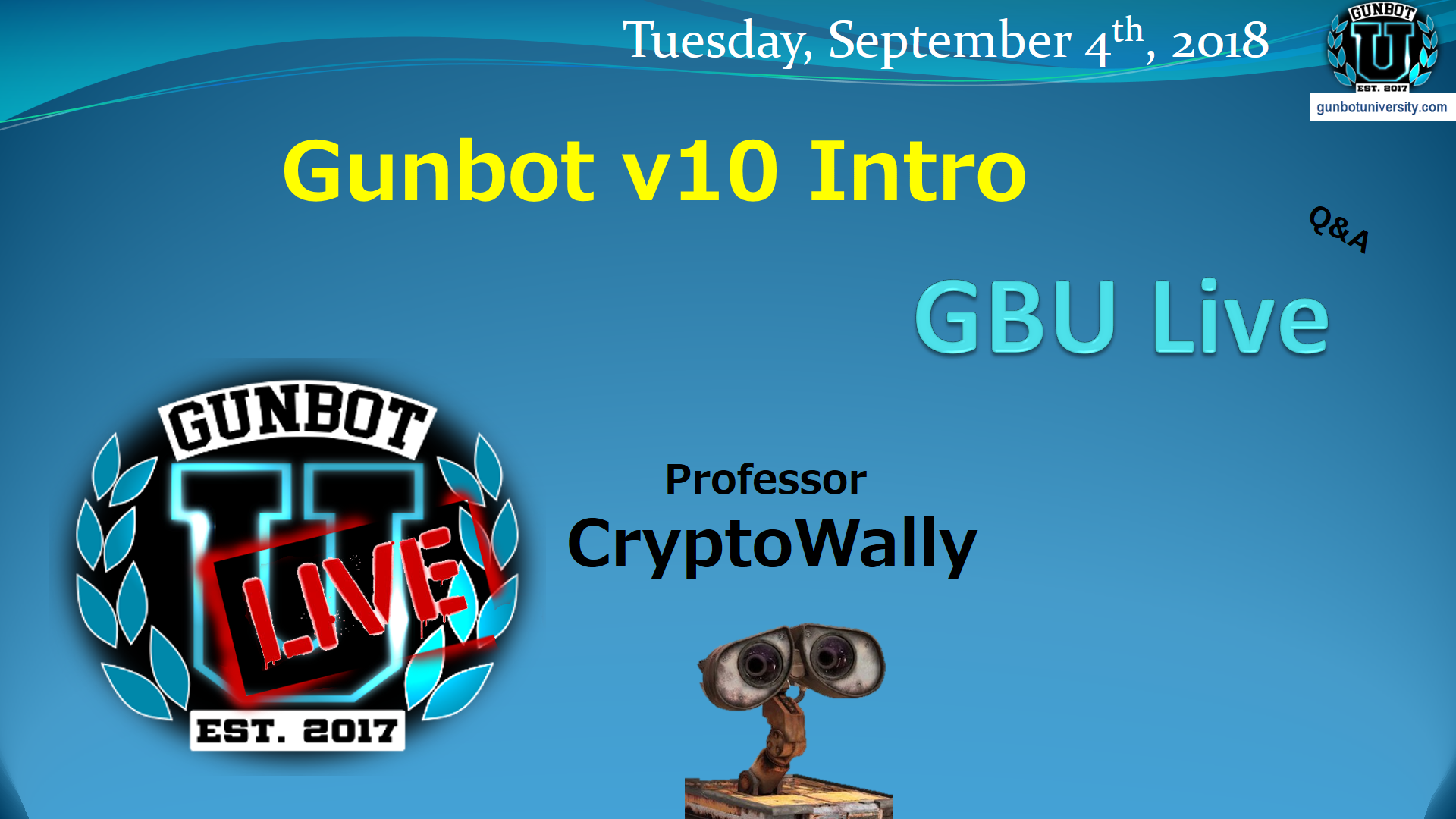